A former violist with the Berlin Philharmonic Orchestra for 14 years, Brett Dean (b. 1961) is an established composer whose work includes orchestral, choral, chamber and vocal pieces, as well as concerti for various solo instruments. For his second opera, he commissioned librettist Matthew Jocelyn to adapt Shakespeare's Hamlet, with Neil Armfield directing. For this North American premiere of Hamlet, Allan Clayton, who played the title role in the world premiere at Glyndebourne, plays Hamlet, along with Brenda Rae as Ophelia, Sarah Connolly as Gertrude, Rod Gilfry as Claudius, and bass-baritone John Relyea as the Ghost. The young Australian conductor Nicholas Carter makes his Met debut in a work that can be as frustrating as it is demanding – a challenge whose scale and ambition should be welcomed.

William Shakespeare's play provided opera with sufficiently powerful literary and dramaturgical material to inspire the Romantic generation with powerful masterpieces, from Bellini to Gounod and Verdi – an echo perpetuated in the 20th century by Britten, Barber and Adès. The repertoire has spared Ambroise Thomas's Hamlet, despite the rather weak adaptation by Jules Barbier and Michel Carré, who adapted the play to the rules of the French Grand Opéra. Apart from some stage music by Prokofiev and Shostakovich, we had to wait for Heiner Müller's emblematic Hamletmaschine (1977), whose depth and existential doubt interested contemporary music theatre with successive versions by Wolgang Rihm (1983), Heiner Goebbels (1885) and Georges Aperghis (1999).
Within a year of each other, Hamlet returned to opera with Anno Schreier at the Theater an der Wien (2016) and Brett Dean at the Glyndebourne Festival (2017). It is this second production that is being revived at the Metropolitan Opera in New York and soon at the Bayerische Staatsoper. The success of this production owes much to the talent of librettist Matthew Jocelyn (who also directed the German premiere at the Cologne Opera House in 2019) for having been able to transcribe as closely as possible the vengeance of the young Danish prince, who is ousted from the throne by his stepfather King Claudius, his father's murderer and his mother's second husband. The libretto covers much of the character's psychological development, feigning a madness that gradually makes him a prisoner of his own inability to act.
Brett Dean and Matthew Jocelyn emphasise the dramatic fluidity and flexibility of the tragedy in Hamlet. The character builds itself freely around the question left open : is he really mad or is he playing madness ? This guideline gives a complex angle to the famous existential question, recited here in a truncated form during the opening monologue : "… not to be ? » On a theatrical level, Brett Dean's opera succeeds in creating a sympathy between the audience and the characters that the music, paradoxically, struggles to bring out. The title role is brilliantly played by Allan Clayton, who is able to make Hamlet's tragic decline credible, caught in the grip of a reality that gives destiny an inescapable twist. "To be"… or "who to be?" in the end. To want or not to want to live, to love or not to love… the character fights against himself and against a music that seems to put a spell on the smallest phoneme by opposing a thick and resistible curtain of notes and chords. There is no denying the composer's ambition to work on his subject by seeking to draw the drama from above, propelling the listener to the extremities of an ultra-emotional musical dimension. 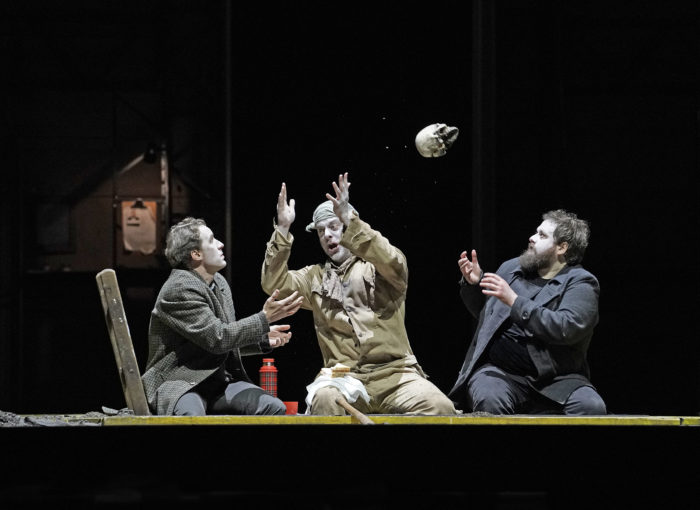 The sound palette regularly plunges into the infra-bass, which places perception at the level of a materiality that amplifies the whispers, the sighs and the workings of a physical as well as psychological machinery. This art form, which Dean describes as a "theatre of sound", requires the performers to transform their own bodies into resonant instruments, as in the powerful scene where Ophelia beats her chest to constrain and stifle emission. Vocally, too, the duo of Rosencrantz and Guildenstern benefits from a writing that makes them a double character, with ornaments in line and intonation that end up turning into a dispensable kind of system. The plethoric orchestra spills out of the pit with two trios of instruments (a clarinet, a trumpet and a percussion ensemble) placed laterally and high up on the floors. A group of voices also sing from the pit, doubled by speakers amplified by subwoofers.
We are immersed in a sound whose viscosity and thickness seek to disorientate the listener, in opposition to the tenuousness of a text that fights bravely against this material made of acoustic and electronic sounds. Nicholas Carter's direction is to be commended for its efforts to give legibility to the layering of sound levels and to guarantee the balance between the pit and the stage. Without limiting the impact and effects, he unfolds the score with a variety of colours and reflections with the amplitude of a river of sound.

Neil Armfield's relatively sober staging unfolds within a generously sized set by Ralph Myers. The vast interior of Elsinore Castle combines fin de siècle grandiloquence with medieval austerity, in a desire to blur the boundaries of time. The royal couple in their crowns stand out from the gallery of other characters in contemporary costumes, their vaguely aristocratic chic being offset by a characteristic white make-up that gives the protagonists the appearance of worldly spectres in an eminently expressionist tradition. Jon Clark's lighting amplifies the livid, tragic quality of the bodies, while highlighting the movement of the movable partitions, which are moved on stage in the sequence where the actors act out the murder of King Gonzaga to confuse Claudius and Gertrude. The graveyard scene benefits from a clever shift of the ceiling down to the floor, freeing up the narrow area in which the gravedigger digs up Yorick's famous skull. The duels are settled with an energy that awakens a tension that is sometimes dormant in the verbose framework of the exchanges, with a final scene that literally turns into a massacre with this hecatomb of bodies slumping to the ground like a macabre and hilarious pile. Dressed in a timeless dark coat, Hamlet walks around in the disguise of a child of the century and a cursed poet, fleeing a world that is increasingly hostile to him and of which he feels desperately alien. Drowned scenically by the darkness that surrounds him as much as by the darkness that gradually engulfs him, he is the invisible centre towards which the dramaturgical lines converge. 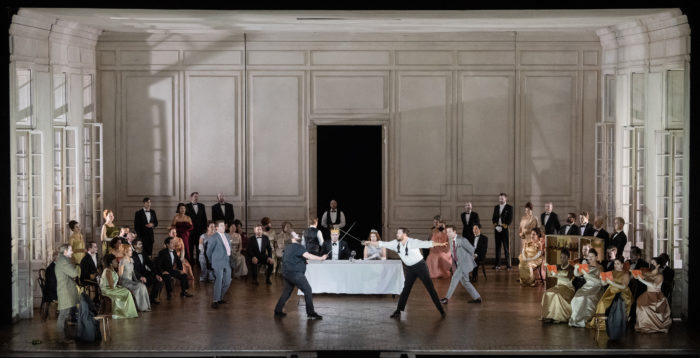 Brett Dean's vocal writing does not shy away from any challenge, giving the evening the appearance of a performance in which all singers are asked to explore their own limits. The constant tension ends up paradoxically revealing a form of listening exhaustion that only the acting can deflect. Brenda Rae (Ophelia) triumphs largely and rightly in this physical confrontation. Without trying to exaggerate the hysterical palette of Barbara Hannigan (creator of the role), she succeeds in capturing the attention in the very long and very virtuoso scene of madness where Neil Armfield imagines her very differently from Rimbaud's poem « And the white Ophelia [who] floats like a great lily". Here she seems to have escaped from John Everett Millais' famous painting, a strange creature slowly crossing the stage, her body covered in mud and holding rushes in her hands. The melismas and stratospheric high notes swirl around in an amalgam of choppy notes that sometimes break on consonant accents. In Allan Clayton, Hamlet finds a performer capable of inhabiting the stage with an impressive vocal projection that knows how to nuance and phrasing when it comes to making the text heard. Rod Gilfry is somewhat limited as Claudius by his narrow high notes and a line that lacks contrast, while Sarah Connolly (Gertrude) and Jacques Imbrailo (Horatio) do not find sufficient space in the libretto to give full vent to their talent. John Relyea is outstanding in the scene where the spectre of the murdered king appears, and as the philosopher/gravedigger. David Butt Philip is a solid Laërte, with William Burden as the elegant Polonius. The two countertenors, Aryeh Nussbaum Cohen and Christopher Lowrey, probably deserved better than their Rosencrantz and Guildenstern act, which forces them to sing mirror characters in a slapstick comedy.