The rebuilding of the Teatro San Cassiano in Venice, an operation that opens up some very beautiful prospects.

The San Cassiano project in Venice, an authentic "promise of happiness"…

Paul Atkin, an English entrepreneur with a passion for music, launched the seemingly visionary initiative – but there is the precedent of the Globe Theatre in London – to rebuild the Teatro San Cassiano in Venice, which dates back to the Baroque period but was demolished in 1812. This could mean new vitality for the baroque opera repertoire.

Sometimes one reads surprising or curious news in the newspapers : what was announced in Venerdì di Repubblica of 15 January was not only curious, but actually sensational. An English entrepreneur with a passion for music, Paul Atkin, set up a group of investors to rebuild the Teatro San Cassiano in Venice, the glorious baroque building demolished in 1812.

The San Cassiano is a sacred name in the history of lyrical theatre : it was there that in 1637 a company of Roman singer-songwriters, led by Francesco Manelli and Benedetto Ferrari, staged their Andromeda "completely at their own expense.” In other words, with Manelli and Ferrari was born the theatre of impresarios, thanks to which Italian melodrama was to emancipate itself from aristocratic patronage and take the risk, while enjoying relative freedom, of a self-financed cultural initiative that in principle no longer needed to reflect the value system and worldview of the aristocratic class. It was a revolution, and it also represents the birth of the "Venetian school" that forged theatrical talents – Cavalli, Legrenzi, Vivaldi – which, from then on and for at least a century and a half, produced works at an incredible pace : unlike today, at the time of the opening of San Cassiano and until the beginning of the nineteenth century, the public demanded ever new works and instrumental compositions, imposing on composers creative rhythms that would make envious an automatic generator of music.

The opening of San Cassiano created a new type of theatre, with a three-tiered productive structure. The first level was made up of the owners of the theatres (besides San Cassiano, many other theatres were born within a few years), i.e. the dozen or so patrician families who governed Venice in the manner of an oligarchy and took it in turns to appoint the Doge. These families were not directly involved in the production of operas, limiting themselves to leasing the theatre they owned to the impresario.

The second level was the impresario, a sort of "general contractor" for the opera season, which ran from St. Stephen's Day (26 December) to Shrove Tuesday and thus coincided with Carnival, which drew crowds of tourists from all over Europe to Venice. The impresario sublet the boxes to the families of the Venetian aristocracy who wanted to go and enjoy this envied symbolic status, and covered the costs of the opera season with the proceeds. But the "commercial risk" rested solely on his shoulders, because the theatre owners were not at risk, while the impresario, who had to foresee everything, could hardly compensate the expenses with the revenue.

The third level of the opera created at San Cassiano was made up of the creators and performers needed for the production : the librettist (then considered the true author of the drama), the composer, the musicians, the scenographers, the carpenters, the hairdressers and all the different trades involved. The whole production revolved around the figure of the singer, who was the first concern of an impresario when he got the order for the theatre season and the biggest item of expenditure : at the opening of the Teatro San Cassiano, a whole new star-system was put in place around capricious singers, with the beginning of the triumphant fashion for castrates.

For these reasons, the reconstruction of San Cassiano by means of an operation similar to the one that led to the reconstruction of the Globe Theatre in London, linking the staging of Baroque works to the place where they were created in an unprecedented way, would mean giving back to the world of music and culture a theatre where history was made, betting that this history still has meaning for us today. Behind the operation promoted by Atkin, there is clearly a genuine intention : to listen to Monteverdi, Cavalli, Legrenzi, in the setting in which they were heard at the time, therefore also with the concern – Atkin himself lists this among the characteristic elements of the project – that the performance be "historically informed". The limits of historicism have been illustrated by the very people who practised it, and I don't want to argue here about whether a lowered pitch, gut strings, baroque strings and vocal masses in themselves guarantee that one will hear a seventeenth-century work as it was actually conceived by the composer.

To satisfy this naive desire for authenticity, the reconstruction of San Cassiano would not be enough : it would be necessary to reconstruct in its entirety the context in which the works were created and appreciated, with all the historical, political, ideological, dress and life details, including the plague – which is neither possible nor desirable. But one must applaud Atkin's idea of promoting "HIPs" (the acronym for "historically informed performance"), because interest in Baroque opera is still fuelled by a historicist preoccupation, where the Ur-Ton has its full justification and validity as an essential element in the overall reconstruction of the phenomenon. The appreciation of Baroque opera cannot in fact be as "immediate" – assuming that a similar concept is ever applicable to melodrama – as that offered by an opera from the repertoire of Verdi, or Puccini, or any other continuously performed nineteenth-century bestseller, but it must be based on precise cognitive hypotheses and result from considerations which call for a correct reconstruction of the original historical conditions. Today, the context of Baroque opera – the culture of the seventeenth and early eighteenth centuries – Is extremely rich : to promote historically enlightened performances is also to revive the cultural humus in which listening to Baroque opera becomes an exciting experience ; it is to offer the public, through modern means, the wonder and astonishment that Baroque stage machinery provoked at the time with its astonishing effects. The key to the whole operation is precisely to offer a "modern" pleasure with a correct, unprejudiced reconstruction of the "old". 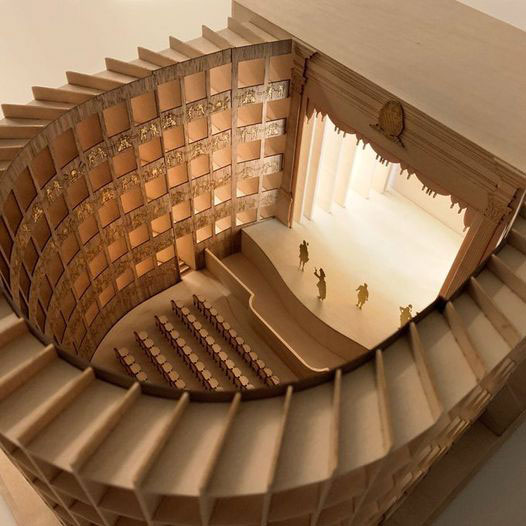 The time seems ripe for an approach to Baroque theatre that considers the pleasure offered by opera as central rather than the sanitised – and impossible – reconstruction of its "authenticity". All this can be done by following the paths already beaten by the best European experiences in re-proposing the Baroque repertoire : flexibility of ensembles (as at the time), cuts that eliminate certain excessive lengths, intelligent direction capable of bringing out the implications contained in the text without distorting its structure. The point remains that of a philological interpretation of the musical part. "Today," wrote Nikolaus Harnoncourt, "unlike three hundred and fifty years ago, we are therefore perfectly capable of transforming, by means of arrangement and instrumentation, a Monteverdi opera into an opera of the nineteenth or twentieth century, in terms of sound. But we can also realise the composer's intentions with the means and possibilities of his time […]". The question remains the same today as in the past : what best serves musical ideas, how to make opera as accessible as possible today ? Having a "historically informed" theatre such as the San Cassiano and staging Baroque operas with a well-tempered "HIP" will therefore, in our opinion, mean creating the conditions for a new type of enjoyment adapted both to the cultural capacities and the expectations of a curious 21st century listener, who is aware of the existence of a significant historical gap between the cultural universe in which Baroque works were born and his own, but who is also betting on the possibility of bridging this gap with the help of all the media that can be made available to him.

In a way, the reconstruction of San Cassiano is exactly the opposite of what the Minister of Culture Franceschini would like to do with the Colosseum, attaching the most important monument of antiquity to a great event with gladiators in Chinese-made costumes as a backdrop. The Colosseum itself has a role as a historical and cultural testimony that has never been interrupted and which only needs to be recognised and protected, without associating it with any delirious cultural management project. On the contrary, reconstructing San Cassiano two centuries after its demolition constitutes the project of a new type of show, where a network of cultural meanings buried by time would be exhumed also thanks to the "original" setting, with its lost hic et nunc. It is obvious that "authenticity" would not concern the new San Cassiano Theatre, which would not be authentic and would not have any historical and documentary value in itself : the reconstructed baroque building would be merely a support, a means of facilitating the public's access to a distant repertoire, and a suggestive stimulus for a fuller aesthetic experience. It should be added that the operation promoted by Atkin, which provides for the exclusive performance of the Baroque repertoire (but Baroque music is long, since it also runs through most of the 18th century), would make it possible to perform rarely heard works on stage, which could represent a very powerful stimulus for the curious 21st century audience eager for culture. It would be like going to the theatre accompanied by someone who explains in advance the meaning and importance of a phenomenon, making it more accessible and lively. 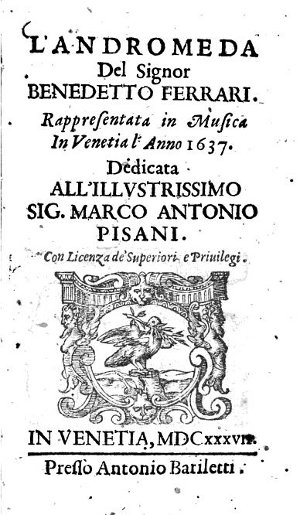 The opening show, since Andromeda's score was lost, will be Monteverdi's L'incoronazione di Poppea (1643). But as a tribute to the overcoming of the old French/Italian cultural rivalry in the perspective of a regained Europeanist enthusiasm, we dare to hope that the Teatro San Cassiano will soon expand its repertoire beyond the Italian sphere and in the future welcome the masterpieces of French Baroque theatre by Lully and then Rameau, and of course also the wonderful Handel. And why not go further back in time and stage the very rare Rappresentazione di Anima et di Corpo by Emilio de' Cavalieri ? And why not also exhume the rich and neglected part of the "theatre festival"? And why not also welcome some Masks in San Cassiano ? All this will be the task of the appointed artistic director, the conductor Andrea Marcon. The fact remains that a marvellous universe, practically unexplored, is opening up to us, an authentic promise of happiness.

To know more about this project : https://www.teatrosancassiano.it/en/the-project 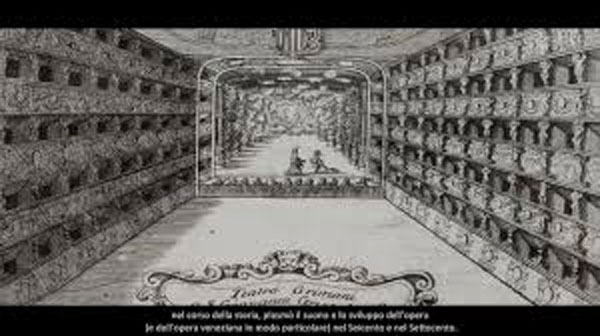 Article précédentWagner’s Ring in Locked-Down Paris : What's the Point ? Why not !
Article suivantMusical wonders of a post-colonial Aida in Paris