A few months ago, the Bayerische Staatsoper presented a Rosenkavalier directed by Barrie Kosky, a production that confirmed a trend that had emerged in recent years : to show that Strauss and Hoffmansthal's masterpiece could be more than a Viennese comedy of manners. For a long time, the transposition to a time closer to our own offered an alternative to the eighteenth-century Vienna stipulated by the libretto, but less literal, less naturalistic approaches could also be envisaged, as Mariame Clément had already attempted in Strasbourg in 2012, setting the action in the universe of commedia dell'arte. In Munich, Kosky opted for allegory, through the figure of an aged Cupid, and made Time the central notion, in accordance with the Marschallin's monologues. Now, in the first days of September 2021, Damiano Michieletto also bases his reading on the personality of Marie-Thérèse von Werdenberg, inviting us to explore the recesses of her psyche and placing her at the heart of the action from one end to the other. This production should have preceded Barrie Kosky's, as it was due to open at the Théâtre royal de la Monnaie in June 2020. The cancellation of the production due to the pandemic means that Vilnius Opera now has the first opportunity to present the new Rosenkavalier, before the other co-producers can present it in their turn.

One might be tempted to say that everything takes place in a single set, but that would not do justice to the transformations of the decor imagined by Paolo Fantin. When the curtain rises, we discover a large white wall with a vast window closed by curtains. Based on the Marschallin’s sentence "Ja… such' dir den Schnee vom vergangenen Jahr!", Damiano Michieletto chooses to make snow one of the keys to the show : the general whiteness of the set, but also the snow that falls several times, in Marie-Thérèse's room itself or in the ideal place where Octavian and Sophie end up, which one hesitates to call a desert of sand or snow. Snow also in the object held in the hand of the first character to appear at the end of the overture : to use politically incorrect language, let us say that the negro Muhammad becomes here the Marschallin's dwarf, who carries around a "snow globe", evoking the snows of yesteryear, full of memories and regrets. The aforementioned Muhammad, dressed all in white, will appear at regular intervals, like a sort of deus ex machina coming to help the young people’s love affair.

When the window curtains are drawn back, we discover a barely modernised vision of the first scene of the opera, with Octavian in his pants and vest, Marie-Thérèse in her nightie, in a room that would not look out of place in one of Robert Carsen’s productions, with its large bed and bedside lamps. The stage business looks fairly traditional at first, until the moment when the Marschallin mentions, without giving any details, what happened to her 'einmal'. It is here that Michieletto definitively breaks away from realistic comedy and begins to show us what the character is thinking about : a double of the Marschallin enters the front of the stage, outside the framework of the room, and is soon joined by the extra playing her husband, who will also be seen on several occasions. We can thus understand that the heroine, married to an older man, was first confronted with violence, then with his indifference, as when he enters the room, takes off his mackintosh and hat, then lies down on the large bed with his back turned to his wife. In the same spirit, the great scene of the reception of parasites and other intruders, inspired to Hoffmansthal by Hogarth's painting The Countess's Morning Levee, from the "Marriage A‑la-Mode" series, becomes here a dreamlike moment, a kind of nightmare of the Marschallin. No hairdresser, the Italian singer remains invisible, but the heroine is confronted with her demons : a little girl, Marie-Thérèse's new double, is visited by an old lady in a wheelchair, who is given the lines of the French-speaking milliner, "Le chapeau Paméla… La poudre à la reine de Golconde!" This old lady who is losing her mind will in turn become an alter ego of the Marschallin ("die alte Fürstin Resi") and the four of them will be reunited in the second act, as if in one of those allegories of the four ages of life that painters of past centuries liked to represent.

This 'single' set is soon subdivided into three spaces : the proscenium, where the scenes at Faninal's house and at the inn mainly take place ; the box seen through the large window, which will be used in particular for the presentation of the rose ; and a third space, the back wall of the previous box being pierced in turn by a curtained window, a third space which reproduces the Marshal's room and where she will be visible at regular intervals.

The curtains that close the two windows encourage transformations : in the second act, Octavian appears in a silver mackintosh in the middle of a field of white balloons, and in the third act a gigantic raven occupies the whole space, with living or dead birds constituting the hallucinations of Baron Ochs.

In this complex setting, we see the Marschallin even when she is not singing and when she is not mentioned. We see her discussing with Valzacchi and preparing the third act’s farce against Lerchenau. The character becomes an inescapable presence, which may mean that she occupies Octavian's mind even as he makes Sophie's acquaintance, unless, on the other hand, everything that happens is to be seen as the content of Marie-Thérèse's mental universe. This interpretation might be confirmed by the final moments of the play : as the young people occupy the new snowy or sandy space that opens up behind the great white wall, the Marschallin's servants bring the large bed and bedside tables from the first act to the front of the stage, and the heroine is once again confronted with her husband's indifference, while the lovebirds enjoy their happiness under the snow that slowly falls on them.

This coherent and strong staging is served in Vilnius by a team largely made up of local forces. It is worth noting that the Lithuanian National Opera even manages the feat of proposing a double cast mainly composed of local singers, proof of the strength of the Baltic countries' singing school. Two Lithuanian marschallins can be heard alternately : on the evening of the second performance, the role was held by Viktorija Miškūnaitė, who is currently entrusted with many of the great roles in the Vilnius repertoire. In the 2021–22 season alone, she will successively be Massenet's Manon, Traviata, Tatiana, Micaëla, Rachel from La Juive and Elisabeth de Valois ! The soprano lends Marie-Thérèse a great deal of spontaneity and a very free singing style, which is well suited to a production that shows us a Marschallin succumbing to despair or fury (in those silent scenes where she occupies the furthest of the three spaces forming the set), a Marschallin whose intervention in Octavian's idyll will ultimately only reinforce her marital misery.

Opposite her, Jelena Kordić is a brilliant Knight of the Rose, as elegant on stage as she is vocally assured. Accustomed to cross-dressing roles (Cherubino, Hänsel, Herodias' page…), the Croatian mezzo nonetheless asserts a conquering femininity as Mariandel. If the photographs of the dress rehearsal are to be believed, Albert Pesendorfer quickly gave up the wig he was supposed to wear in the second act : a coarse man but an aristocrat all the same, his Baron Ochs does not need this kind of accessory to exist. The last member of the quartet, Monika Pleškitė's Sophie, is at first not very audible in the "recitative" phrases, but fortunately her voice finds its full range in the flights of high notes.

Of the rest of the cast, we can single out Regina Šilinskaitė and Rafailas Karpis, Annina and Valzacchi, whom Damiano Michieletto makes into two almost identical and inseparable beings (cloned like the Oompa-Loompas in Charlie and the Chocolate Factory?), robots whose movements on stage are generally symmetrical. The unusual truculence of Liudas Mikalauskas' police inspector is also noteworthy. As for the name of the actor playing Muhammad, it does not appear on the Vilnius Opera website.

At the head of the orchestra, the artistic director of the Lithuanian National Opera, the Roman conductor Sesto Quatrini, leads the local phalanx with a precision which, after a somewhat tame opening, bears fruit and allows the listener not to lose any of the details of the Straussian orchestration. 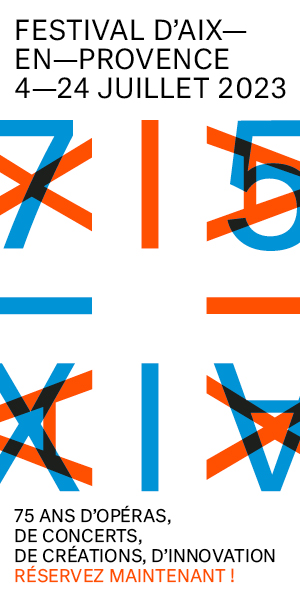