The Metropolitan Opera's final season brings together various styles and eras, with two new productions and two revivals. On the new side, Philip Glass' Akhnaten and the American premiere of Brett Dean's striking Hamlet ; on the revival side, Jonathan Miller's ageless Rake's Progress ; and the production of Bartlett Sher's Rigoletto given in January and conducted by Daniele Rustioni. Verdi's masterpiece benefits from the company's inimitable know-how, with a spectacular staging, some impressive sets, and an impeccable gallery of costumes and props. A solid cast alternates confirmed values (Rigoletto and Duke) and beautiful surprises (Erin Morley), the whole being brought to life with mastery and brio by Karen Kamensek's attentive conducting, which allows the two fantastic house instruments, the chorus and the MET orchestra, to gleam and roar. 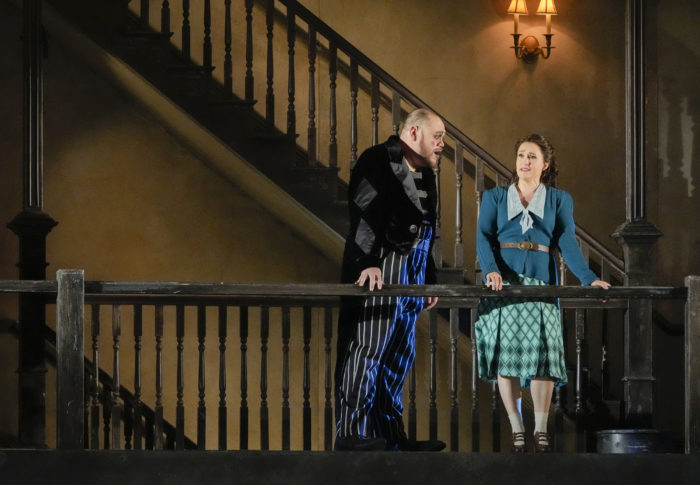 For this production, the famous largest curtain in the world is replaced by a transparent canvas on which faces and perspectives in warm colours are jostling each other, as if escaping from an expressionist painting, between The Cabinet of Dr Caligari, Max Beckmann or George Grosz. This atmosphere of imminent catastrophe, with a hint of Interwar Germany , gives the Duke of Mantua's palace a crepuscular, Viscontian feel. The elaborate lights reveal Michael Yeargan's set as a cubic mass that pivots on itself, revealing a scarlet interior made of marble and velvet in the interstice of its high openings. This voluminous set plays the card of efficiency and legibility with just the right amount of wise abstraction so as not to fall completely into the realm of pasteboard. This massive space is placed on a central spinner which frees up the vanishing lines on the sides, showing the alleys through which Rigoletto and the courtiers slip. The back of the cube will be used, for the most part, for the scene in Sparafucile's house, with Donald Holder's lighting as a dynamic element, which sometimes skims the surfaces to bring out their gloomy aspect, and sometimes magnifies the golds and purples.

Victor Hugo's drama is expressed here in a very large format, giving the characters a monolithic appearance through acting ; gestures, mimicry and glances emphasize a theatrical framework entirely built on the expression of feelings and drama. Bartlett Sher's staging highlights the character of Rigoletto based on a physical build that is paradoxically muscular and ungainly, an amalgam of the hunchback of Notre-Dame and a fairy-tale ogre in a grotesque frock coat, striped trousers, top hat and black ruff collar. Before he utters the first word, we can clearly read on his face the psychological crack of the jester condemned to make his masters and future executioners laugh, but also the protective father undermined by his love for his daughter and the pain of seeing her thrown into the lion's den. The noble areopagus of the Mantuan court is a mixture of operetta aristocrats from which a few picturesque figures occasionally emerge. The Duke alternates from the modest suit of Gualtier Maldè with a flamboyant ceremonial outfit that could, in contrast, make Gilda a cousin of Cinderella or Empress Sissi of Austria. For it is indeed this mainstream cinematic vein that is exploited here, and which increases the pain of seeing the young girl's fate precipitated in a setting akin to a Broadway musical – a poor little girl killed in a sordid manner, both an expiatory (and involuntary) victim and the object of a quid pro quo revenge.

A large part of the set reflects this very illustrative approach, without the psychological background that would give the characters with more depth and complexity than these well-defined characters. Thus, the title role played by Quinn Kelsey, a powerful and seasoned voice (this is his 17th production of Rigoletto!) but whose expression suffers from a relative neutrality in the way he nuances and phrasing. After a well-pitched and solid « Si, vendetta », the « Cortigiani, vil razza dannata » delivers a rather generic emotion and quickly turns into a technical demonstration. The duet « V'ho ingannato, colpevole fui » has a certain panache but the pain is never really palpable as death takes Gilda from him.

Stephen Costello is an explicitly confident and sarcastic Duke but his voice does not pause on the modulations of the « Della mia bella incognita borghese », as if he were already laying down his cards and revealing in advance the cunning and boastful seducer. One admires his long notes and  high passage in « Questa o quella per me pari sono », stunning in its brilliance but very univocal in the way it conveys emotion in « La donna è mobile ».

In stark contrast to these powerful voices with limited dramatic investment, Erin Morley's Gilda is the great triumph of the evening. She takes the winning gamble of a line that is committed to continuous variation of affect but without the superficiality that robs her colleagues of real emotion. With feeling as her only guide, she bends her young voice to the long portamentos in « Gualtier Maldè… Caro nome », with high notes that pierce the surface as so many acmes, with totally disconcerting ease – this alone would deserve the beautiful standing ovation at the curtain. In III, the young girl gives voice to the wounded woman, disappointed in her love, who deliberately chooses to offer herself to the assassin's blade to clear her honour and that of her father.

One has to mention the formidable and terrifying brawn of Ante Jerkunica's Sparafucile, who appropriates his character with extraordinary authority and forms a diabolical couple with Yulia Matochkina's Maddalena. Neither should Craig Colclough's robust Monterone be overlooked. All the supporting roles deserve praise, with Edyta Kulczak's shady Giovanna, the beautiful spontaneity of Chanáe Curtis's Countess Ceprano or Jeongcheol Cha's very present Marullo. Plus a special mention for the Metropolitan Opera Chorus, which seems tailor-made for this ironic drama. The banter of the « Scorrendo uniti » is matched by the interventions in the kidnapping scene, with a coherence and variety of accents that are both natural and elegant.

In parallel to the Akhnaten performances, Karen Kamensek also conducted Rigoletto, for which she was called in at the last minute. Throughout the evening, she demonstrated qualities as a musician that go beyond simple technical mastery. One must hear the way she detaches the end of the stretto and the intervention of the chorus at the end of « Oh tu che la festa audace hai turbato » or the changes of nuance, the voluble strings in the implacable backwash of « Cortigiani, vil razza dannata… » Her direction surprises and enlivens a scenography that is sometimes short of ideas. The effects and contrasts she obtains from the Metropolitan Opera Orchestra magnify the moments when the tension peaks and the dramatic line plunges the listener into the heart of the emotion.