Igor Stravinski (1882–1971)
The Rake's Progress (1951)
Opera in three acts
Libretto by W. H. Auden and Chester Kallman, based on a series of paintings by William Hogarth
Premiere September 11, 1951 at La Fenice in Venice

The Metropolitan Opera is reviving Jonathan Miller's 1997 ageless production of The Rake's Progress. It is an opportunity to bring together a fine vocal team led by Ann Trulove and Tom Rakewell, brilliantly interpreted by Golda Schultz and Ben Bliss, two youthful and virtuoso voices at ease with the technical and expressive difficulties of the score. Christian van Horn lends his tall figure to the evil Nick Shadow, while Raehann Bryce-Davis offers a stunning performance as Baba the Turk. Conducting the Metropolitan Opera Orchestra, Susanna Mälkki displays a wealth of nuance and ideas that place Stravinsky's only opera among the highest of modern masterpieces. 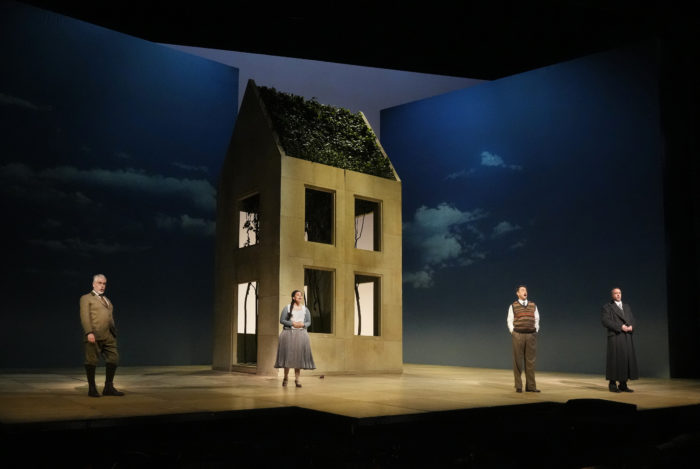 Stravinsky long dithered around the opera genre, using reduced and composite forms in which musical theatre met oratorio – with the spoken and sung voice as a fully-fledged instrument playing an essential role in a musical modernity that turned its back on the traditional uses of lyrical dramaturgy. With The Rake's Progress, Stravinsky not only wrote his first and only "opera", but also took up the challenge of composing music on a complex framework made up of a succession of tableaux whose commentary serves as a libretto in the manner of a secular Way of the Cross. Inspired in part by the eponymous series of eight paintings by William Hogarth, Wystan Hugh Auden's libretto does not totally desacralise the subject – adding aspects of the Bildungsroman or picaresque novel which make Tom Rakewell's "progress" a kind of trajectory seen through the narrative prism of a series of vignettes illustrating a fragmented, diffracted life.

A famous but relatively rare work in our latitudes, The Rake's Progress is the victime of the originality of its structure, which is both a major aesthetic asset and a redhibitory obstacle for a staging that would attempt to find a general line to this fragmentation. Stravinsky declared in a not unhumorous presentation text : "The musical execution of The Rake's Progress poses no problem, but its adaptation to the stage presents certain difficulties. In any case, I would argue that the main obstacles to a truly convincing visualization of this work lie solely in the inability of some to accept it as it is."

In this respect, Jonathan Miller's production cannot be accused of minimising the use of inventions of unprecedented boldness, but rather of favouring a clear and uncluttered approach, following a pictorial and graphic aesthetic whose immediacy provides a legibility that gives full dimension to Stravinsky's libretto and score. The series of "tableaux" is part of a gallery of situations and affects that move from the playful to the pathetic, from exaltation to melancholy, from the intimate to the public… A message whose humanity and universality is translated by a score made of collages and pastiches that deploy a brilliant imitation of (and homage to) classical opera : recitatives, arias, duets, trios, choruses, interludes – stylistic exercises that replace an atmosphere close to Fielding's Tom Jones or Thackeray's Barry Lyndon with the trappings of a timeless masterpiece.

Jonathan Miller's choice to respond faithfully to the libretto with a multiplicity of stage spaces implies systematic recourse to changes of scenery and constant raising and lowering of the curtains. The whole series of sketches forms a sort of picture book marked by a very illustrative aesthetic, somewhere between Magritte and the covers of American magazines of the inter-war period. We are far from 18th-century England, but a sort of balance is found between abstraction in the settings and realism in the details and costumes. The Trulove house resembles those cubic buildings that children play with, with the curious detail of a tree growing inside with green foliage trimmed into the shape of a roof. The streets of London are stylised to the extreme, with vanishing lines and cut-out factory profiles, the same landscapes being seen through Tom's dining room window.

Miller imagines variations on the idea of a poet and a composer meeting – against the backdrop of the looming madness and the world of the city and speculation that eventually corrupts the naive young man. Such treatment overshadows the Faustian pact between Tom and Nick Shadow, favouring the Marxist social fable project so dear to librettist Wystan Hugh Auden and his friends Christopher Isherwood and Stephen Spender, with whom he had travelled through Weimar Germany. Visually, the result is this 20th-century industrial city, reminiscent not just of London but vaguely of Berlin or any other financial centre, with its cabarets and brothels, mixing the paintings of Hogarth with the decadent George Grosz and Otto Dix.

While Trulove reads his Wiener Zeitung in Bavarian dress and later, after making his fortune, Tom Rakewell imitates him by taking over his newspaper and adding to his collection of stuffed animals, fawns and a shark (a shark that was found in David Hockney's set design and John Cox's production at Glyndebourne in 1975, with the same comic number where Baba smashes everything on the table). That said, beyond the novel of education, a disillusioned sadness hangs over this story of a young man who makes a career and ends up wiped out by madness. Of course, we laugh a lot when Baba the Turk arrives in her car among her admirers or when she has a nervous breakdown and breaks the dishes. But this intrusion (remember that the character is a pure invention of Auden's) ends with the bitter realization that she has been duped by Tom and that it is impossible for her to form a united couple with him – something she half-heartedly confesses to Ann. For Tom, it is also the loss of illusions and the refusal to grow up. He is like a child in Nick's hands, showing him a machine for making loaves of bread out of stones (by the way, a hilarious amalgam of Catholicism and Marxism!) but the atmosphere changes with the scene where he gambles his soul by guessing the cards Nick offers him – and the devil, furious at having to abdicate, pronounces the formula that precipitates Tom into madness. The final scene in the lunatic asylum is by far the most touching and shows an agony stripped of all tragic connotations, with Tom expiring like a child cradled in Ann's arms. Time is abolished, only the notion of purity remains, the characters being as if in a Garden of Eden, captured by the mimicry of the mythological figures of Adonis and Venus. This is the moment chosen by Jonathan Miller to wipe out the set, to make it disappear completely, so as to perform the epilogue with a plain black background – a drastic solution that gives this sung moral its humorous and bittersweet dimension.

This production needed a high-flying cast that could bring a breath of fresh air and energy to Stravinsky's music. Mission accomplished : the young cast gathered around Susanna Mälkki gives this musical parable the ideal accents, character and nuances. Golda Schultz gives the character of Ann a line that is both powerful and finely detailed with a beautiful density in all registers, as she demonstrates in her great aria « No word from Tom… I go to him ». There is not a single note missing in the ornaments, negotiated with first-rate agility. Underneath the Mozartian flesh, there is an obvious Straussian atavism that offers a phrasing and a sense of the text with a sharpness that enlivens the musicality and the emotion (« Gently, little boat »). Ben Bliss's Tom Rakewell is an obvious alter ego, with a style and technique that give his « Here I stand… » a disconcerting ease in integrating the art of baroque recitative with the raunchy and elegiac. Able to modulate « Love, too frequently betrayed » without giving in to easy lament or to give « Vary the song » an instability and feverishness that magnifies its expression, he makes his character the perfect adolescent hero of a parable whose meaning escapes him. Through the subtlety of the delivery and the control of the projection, he makes the ultimate « Where art thou, Venus ? » an ode to beauty that is also a form of farewell to the world. Christian van Horn's Nick Shadow is the third member of this successful ensemble, handling irony and aplomb with a confounding art of characterisation. He reveals the evil character underneath the mask of respectability with a complex and sustained timbre, sometimes imitating kindness and sometimes cruelty (« Fair Ladies, Gracious Gentlemen… »). We can't wait for the surprises he has in store for us when he jumps from Stravinsky's Devil to Gounod's Méfistofélès in the revival of Faust directed by Tobias Krätzer at the Bastille in late June…

The whole of the supporting cast deserves a lot of praise, starting with Raehann Bryce-Davis who devours, both scenically and vocally, the role of Baba the Turk that she seems to reinvent at every turn (« As I was saying, both brothers wore moustaches »). She immediately conquers the audience, with a captivating act where she competes with the hunting trophies that clutter Tom's living room. Both tiger and carnivorous shark, her voice dives with delight into the abyss, only to emerge the next moment in a vibrant, high-pitched line (« Scorned ! Abused ! Neglected ! Baited ! »). James Creswell's paternal and calculating Trulove seduces with the dark elegance of his diction, with the kind of deftness and acting that Eve Gigliotti's Mother Goose lacks in a somewhat constricted brothel scene. Finally, let us salute Tony Stevenson's performance as Sellem, the auctioneer. While he can lighten the daunting technical difficulty of the auction scene with playfulness and a bantering tone, he suddenly shifts from the grumpy character to the narrow-mindedness of the cold speculator. This scene features the astonishing individualities that make up the Metropolitan Opera chorus – an ensemble that never fails to reveal organic qualities of fabulous coherence and impact.

Susanna Mälkki chisels out Stravinsky's neoclassicism without systematically underlining the margins where Rake's comes to bite on Così or Don Giovanni. Taking great care to integrate the quotations into a gesture that unifies them in a voluptuous flow of finesse, she makes her own the quotation of the composer in his Poetics of Music (1939–40): "The more art is controlled, limited, worked on, the freer it is ». The repeated motifs and the fixed rhythm of Stravinsky's machinery find here a very theatrical expression that turns the orchestra into a master builder, pulling from the pit the invisible threads that animate the melodrama. The precision with which the wind section pecks out the melodic design in the elegiac scenes is matched by the sensuality and volume of the strings. We move from a harmonic dimension sketched out in drypoint in the comic and verbose sketches (Auction scene, Tom-Ann-Baba trio) to a Commedia dell'arte on the fragile border between drama and comedy. This multiple reading reveals the contradictions of a music that likes to combine the large format of a seemingly derisory text with lightness and banter in dramatic passages. "You have what is necessary because you have what is superfluous" said the Devil to the Soldier in L’Histoire du soldat. The orchestra sums up this superfluous necessity and necessary superfluity – a musical oxymoron of the destiny and aspirations of this brilliant Rake's Progress.